Often following the 10 a.m. worship service and coffee hour, we host what we call a “Second Hour.” This is an opportunity to gather as a community to deepen our learning, engage in conversation, and sometimes just eat good food. While these events occur after the Sunday morning worship service, there is no expectation that you need attend the service in order to come to the Second Hour event. These events are always free and open to the entire community. They are held in Community Hall towards the back of the building, near the parking lot. At this time we have suspended “Second Hour” meetings with an eye towards what is must important in the virtual world. 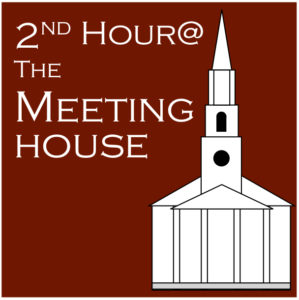 March 31, 2019: The Age of Quantum Entanglement with Louisa Gilder (video)

December 2, 2018: State of the Refugee Crisis with “No Lost Generation” (video)

March 5, 2017: The Making of a Racist with Professor Charles Dew (video)

October 23, 2016: The Word Became Flesh: How to Read the Gospel of John with Professor Melanie Johnson-DeBaufre (video)

May 10, 2015: Moving Towards a Sustainable Meetinghouse with Jim Nail (video)

May 12, 2013: Religion and the Arab Spring with Professor Magnus Bernhardsson (video)

May 5, 2013: The Current Crisis of Authority within Catholicism with President Emeritus Frank Oakley (video)

January 13 or 20, 2013: The Invention of Religion in Japan with Professor Jason Josephson (video)

November 11, 2012: Catholicism 101: Before and After the Reformation with Fr. Gary Caster (video)